Delta Troop began it's history in 1833 when it was formed as part of the 1st Squadron 1st Cavalry. It has, since it's inception, indelibly engraved it's name in the annals of history as a part of the United States Army's most battle honored unit. It's troopers served proudly in the Mexican War, Indian War, Civil War, Spanish-American War, World War II, and are upholding it's tradition in Vietnam today. Whenever, in our nation's history, the call has gone out to defend liberty, repulse oppression, and rout tyranny, "Delta Troop" has answered --- and never has it failed: 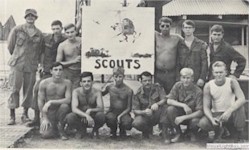 In the Autumn of 1967 the call went out once more --Vietnam. A different type of war was being fought there--a ware of hit and run, fought by an elusive enemy. To win this war new concepts had to be devised, tested, and then applied. One of the newest concepts was that of an Air Cavalry Troop. It's job to find the enemy, harass him, and bring about his destruction. "Delta Troop" was chosen for this task and from Autumn of 1967 until the Summer of 1968 it formed and practiced it's tactics until ...homed perfection. On 21 July 1968, D Troop reported "Present For Duty" to the 101st Airborne Division in I corps, Republic of Vietnam.

The enemy soon learned to fear and respect us. Those audacious "Charlie's" who fired at our Scout Birds were rewarded by the thunder and lightning of the answering Cobra Gunships. Seldom was Charles able to fight again.

As our LOH's and Snakes scouted from the sky, so did our Aero-Rifle Platoon scout from the ground. We sought endlessly for the enemy. In addition to our own missions we supported other units within the 101st Airborne Division as well as the 3rd Marine Division. Our stomping ground extended the width of Vietnam from Da Nang to the DMZ.

On May 1 the Troop spread it's wings and journeyed south to rejoin it's parent unit, the 1st Squadron 1st Cavalry, at Chu Lai. The Americal Division became our new home. On 12 May we began operations. An Outpost Southwest of Tam Ky had been attacked the night before. As tanks and armored personnel carriers of A, B, and C Troops churned towards the outpost, the Helicopers of D Troop scouted ahead and to the flanks for them. When they were engaged, D Troop spotted the enemy's hidden positions and levelled them as the tracks attacked. Our efforts greatly aided in alleviating the pressure on the outpost.

We then moved to the flatlands, constantly keeping them under surveillance. Simultaneously, we moved north and west into the Foothills-- as we sought the enemy's base camps: and destroyed them when they were found.

In October of1969 we were detached from the 1st Squadron 1st Cavalry and attached to the 123rd Aviation Battalion. Our mission became the support of the 198th Infantry Brigade. Almost immediately upon our entry into this new area of operations, we discovered a regimantal size enemy base camp. Methodically it was destroyed. Diligently we worked, guiding friendly troops as they scoured the area and destroying enemy structures ourselves.

When not supporting our own troops, D Troop willingly lended a hand to the Army of the Republic of Vietnam-- inserting them and scouting the territory around them. Through our efforts they are able to conduct a larger part of the war.

The history of D Troop has been made by the men depicted in this book and by others whom these men have replaced. Although differing in rank, age, experience, and color, there is one bond common; all are "Delta Troopers" and all have diligently upheld the tradition of the most battle honored unit in the history of the United States Army.